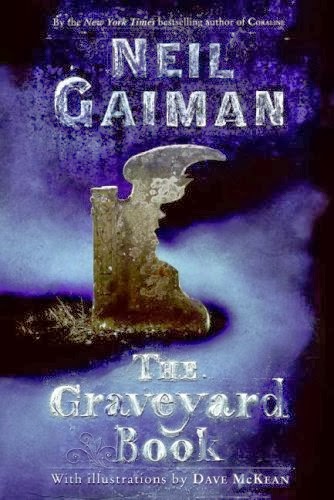 A free-form reader response to The Graveyard Book by Neil Gaiman for my Teen Materials class. This was the Fantasy title required for the whole class. I'm writing this response a day after finishing the whole book, instead of during the read.

I hadn't heard about this title before seeing the list of required reading for the semester, but I had read his Sandman comic series, his novels American Gods and Good Omens, watched the film versions of Coraline and MirrorMask, and I could swear there was at least one more thing I can't recall. Would recognize the art if I saw it.

As usual with Gaiman, it's a pleasure to read/view but never quite to the point of a personal favorite. (Please don't stone me, Gaiman fanatic friends!)

I enjoyed the illustrations at the beginning of chapters more than I should admit in public. Not the specific illustrator's style, but just having something more than text is, wow! I really need to demand more from my adult reading. I had to show everyone around me the first two-page spread dedicated to the first line.

I also enjoyed the mix of historical appreciation and modernity. I laughed quite a lot at Scarlett's question, "If you wanted to find out about a  murder, where would you look? I already tried the Internet." Especially when it was followed up by a strong pitch for using public libraries for research. Gaiman is such an effective library advocate.

But the one thing that really stood out go me about The Graveyard Book is subtle. Readers know right away when characters are ghosts, but there are several other characters which are not standard humans and they're not ghosts. The remarkable thing is that Gaiman introduces them as individual people long before he introduces them as a this or as a that. It's a wonderful, subliminal way of showing young readers that who someone is is more important than what someone is. And not-a-shocking-spoiler: the character described as "the man Jack" is an interesting subversion of this trend. This character who seems to be explicitly identified by what he is, is not actually what's advertised.

Of secondary interest for me, Bod's journey from childhood to becoming a man was satisfying. Almost. I felt let down by the climax of the story. If I had been Gaiman's editor, I would have asked him to throw out that chapter and try something totally different. Your mileage may vary.

** You may want to stop here and finish reading after finishing the book yourself. **

The last thing I want to mention is that the book doesn't wrap up everything neatly. At one point in Bod's hero's journey, he is told to find his name. This never explicitly happens. But if you think about it, what's important is the not the name Bod's parents gave him but the name he earns as a toddler and by his coming of age heroism: The Man Nobody Owens. Say it out loud.
Posted by Garren Hochstetler at 6:42 PM

Thinking about reviving this blog after a long hiatus.